The Airedale is the largest of all the Terrier breeds. Its origins date back to the mid-1800s, when authorities on the breed believe it was developed as a result of a cross of the Otterhound and the now-extinct Black & Tan Terrier. They were developed in the valley of the River Aire in south Yorkshire, England. These early crosses were called Working, Waterside or Bingley Terriers. They were used for hunting fox, badger, weasel, otter and river rats, plus other small game.

The patriarch of the breed is considered to be CH Master Briar (1897-1906). Two of his sons, Crompton Marvel and Monarch, also made important contributions to the breed. The latter was imported to Philadelphia, Pennsylvania.

The Airedale Terrier was recognized by United Kennel Club in 1914.

The Airedale is the largest of all Terriers, and was bred as a hunting and working dog. The breed is well proportioned and somewhat cobby, without exaggeration of leg or body length. It has a harsh, tight coat that is black and tan in color and a moderately long, erect, docked tail.

Considered the King of Terriers, it is now used for multiple purposes, from police work to family pet. All characteristics related to the breed’s versatility are to be maintained.

Airedales are above all fearless, and majestic in appearance. Their courage is unquestioned, but they are not quarrelsome. The Airedale’s proud character is denoted in the carriage of ears and tail. They have quick movement and are always ready for action. They are alert and are a good protection and family dog.

Well balanced, with skull and muzzle of equal length and a barely visible stop.

The skull should be long, flat and not too broad, tapering in width slightly towards the eye. The scalp is free of wrinkles.

The foreface should be deep and powerful, well filled below the eyes but delicately chiseled to prevent plainness. The lips are tight.

A full complement of strong, white teeth meet in a close scissors bite. A level bite is acceptable but not preferred.

Dark and small, not prominent. Full of keenness, intelligence and terrier expression. Light or bold eyes are highly undesirable.

Black. Not too small.

V-shaped, small, but in proportion to the size of the dog. The topline of the folded ear should be above the level of the skull. Carriage is to the side of the head, not pointed toward the eye.

Of moderate length and thickness, clean at the throat, widening gradually towards the body.

The shoulder blades are long, flat and well laid back.

The forelegs are perfectly straight with plenty of muscle and bone. The elbows are perpendicular to the body, working free of the sides.

Chest is deep but not too broad. The back is short, strong and level. The ribs are well sprung. Loin is short, broad and muscular, giving little space between the last rib and the hip joint.

Well bent at the stifle, with short rear pasterns that are parallel when viewed from behind.

Faults: Stifles turned in or out.

The feet are small, round and compact. They have a good depth of pad, and the toes are moderately arched.

Faults: Toes turned in or out.

The tail is customarily docked to a fair length. It is of good strength and substance and is carried high.

Fault: Tail curled over the back.

The outer coat is moderate in length, hard, dense and wiry. It is straight and close, covering the dog over the body and legs. Some of the hardest coats are crinkling or just slightly waved. Undercoat is short and soft.

Body saddle, back of neck and top side of tail are black or grizzled. All other parts are tan. Ears may be a darker tan that the rest of the head and shadings may occur around the neck and the sides of the skull. A small white blaze on the chest is acceptable.

Males 23-24 inches at the shoulder. Females, slightly smaller. Both sexes are sturdy, well muscled and well boned. Weight is commensurate with height.

(A dog with a Disqualification must not be considered for placement in a conformation event, and must be reported to UKC.)
Unilateral or bilateral cryptorchid.
Viciousness or extreme shyness.
Artificial coloring.
Artificial stiffening of the hair coat.
Albinism.

The docking of tails and cropping of ears in America is legal and remains a personal choice. However, as an international registry, the United Kennel Club, Inc. is aware that the practices of cropping and docking have been forbidden in some countries. In light of these developments, the United Kennel Club, Inc. feels that no dog in any UKC event, including conformation, shall be penalized for a full tail or natural ears. 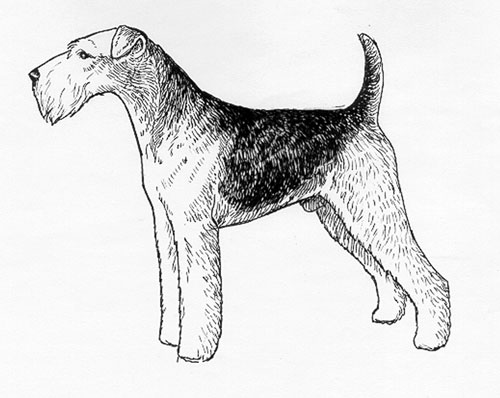