The Tibetan Mastiff, or Do-Khyi, is a large working dog from the Himalayas. Tracing the breeds history back to antiquity, it acted as the guardian and companion of the Tibetan villagers and nomads, as well as being the traditional guardian of the Tibetan monasteries. Some accounts by travelers to the region, dating as far back as the late 1200s, describe a large dog that may have been a representative of one of the landraces used to establish the Tibetan Mastiff as a standardized breed. These accounts mention the natural strength and physical and mental impressiveness, which is evident in the Tibetan Mastiff today. Even its deep bark has been described as a unique and highly treasured feature of the breed. Many cynologists consider the Tibetan Mastiff the forefather of all large mountain and mastiff breeds.

The Tibetan Mastiff was recognized by the United Kennel Club in 1998.

Large, sound, well-boned and muscled, and powerfully built, while always remaining agile in order to perform its traditional guardian job.

The impressive head provides a noble and dignified look, enhanced by a mane around the head and neck. The head is balanced by a curled tail carried over the back. Males are larger than the females, with heavier features and carrying more coat. The Tibetan Mastiff is still widely used in its traditional role as a natural guardian of family and flock, and has an aloof and independent nature.

Any tendencies toward exaggeration are unacceptable. Tibetan Mastiffs with overly-pendulous flews, eyes partially or wholly obscured by loose, excess skin or wrinkles, and disproportionate bone are poor representations of this working breed. Quality is not to be sacrificed if favor of size, coat, or bone.

A loyal companion and natural guardian that bonds closely with its family and charges. Highly intelligent, strong-willed, independent, aloof and protective when necessary. Patient and tolerant; may be wary of strangers. Any reserve, protectiveness or lack of enthusiasm when exhibited should not be penalized provided the dog can be properly evaluated.

The head is broad, heavy and strong. Proportions from occiput to stop, and stop to the end of the nose, range from equal lengths (1 to 1), to a muzzle that is somewhat shorter than the length of the topskull (2 to 3). With maturity, some wrinkling may be present on the head, extending from above the eyes to the corner of the mouth.

The skull is just off square, wide from ear to ear, slightly rounded, with a strongly defined occiput. The stop is moderate, but well-defined. The stop is defined by a prominent supraorbital brow that slightly protrudes, creating a rise at each eyebrow, thereby creating a deeper stop.

Fairly broad, well padded, blunt and square. Lips well-developed, with moderate flews that cover the line of the underjaw to provide a square appearance. The Tibetan Mastiff is a dry mouthed breed.

Broad, with well opened nostrils. As dark as possible, depending on the color of the coat.

A full complement of strong, white teeth meet in a scissors bite, fitting tightly to maintain a strong chin. A level bite is acceptable. The jaws are strong.

The eyes are not obscured by wrinkles or loose skin.

Medium size, triangular, pendant, set between the level of the skull and the eye, hanging close to the head when in repose. When at attention, level with the top of skull and brought forward, appearing to broaden the skull. Thick ear leathers covered with soft short hair.

The neck is strong, arched and well muscled. Very wide at the base, short in length, carried level with the topline when gaiting naturally. A moderate dewlap is acceptable. The dewlap is more prominent in males. The neck is covered by a thick, upstanding mane, which is not as pronounced in females as in males.

Straight, with strong bone and elbows close to the body. Pasterns are strong and slightly sloping.

Slightly longer than tall in proportion, with a strong, straight back. The chest is rather deep and quite wide in mature dogs. Ribs are nicely sprung in a heart shape. The brisket reaches below the elbows. The strong loin is slightly arched. The croup is broad and rather flat, but not level.
Serious Faults: Barrel shaped ribs. Narrow chest. Withers set high above topline. Roach back. Sagging back. Slab sided. Level croup.

Powerful and muscular, with moderate angulation.

Parallel when seen from behind. Upper thigh is rather long with hard, but not bulging, muscles. The stifle is well bent and the hocks are low and strong. Dewclaws are optional.

The feet are fairly large, strong, and well knuckled, with thick pads, rounded and compact.

The tail is medium length, set high on line with the top of the back, and carried high in a curl over the back when the dog is alert or moving. When the dog is relaxed, the tail may drop. When hanging down, the tailbone reaches to the hock joint.

Serious Fault: Tail not carried over the back when gaiting.

Quality of coat is more important than quantity. The Tibetan Mastiff is double coated. The outer coat is harsh in texture, thick, stands off the body, and ranges from fairly short to moderately long. The undercoat is dense and woolly in cold climates, and becomes sparse in warm weather.

The mane blends into a shawl that runs over the shoulders, down the length of the spine, becoming shorter over the hips, and blending into the breeches. Where guard hairs are longer, the undercoat maybe thicker.

The hair on the ear leather is soft, and short. The hair behind the ears and on the cheeks may be longer.

The tail, breeches, rear pasterns, back of the forelegs and along the underline are feathered. Length may vary from dog to dog, but feathering is evident.

Serious Faults: Fine outer coat. Silky, curly or wavy coat. Long guard hairs beginning between the eyebrows and behind the eyes. Excessive feathering, so much as to appear exaggerated. Long hair on the front of the legs.

The Tibetan Mastiff is exhibited in a natural condition with no trimming. Seasonal shedding is not to be penalized.

Pigmentation on lips, nose and eye rims is black, except on dilute colors (chocolate, blue and gold dilute), where the pigmentation is also diluted but should be as dark as possible.

Size and substance are important breed traits; however, quality is not to be sacrificed in favor of size.

Powerful, light and elastic, with good reach and drive, and capable of considerable speed. Measured and deliberate when walking. At speed will tend toward, and may reach, a single track.

(A dog with a Disqualification must not be considered for placement in a conformation event, and must be reported to UKC.)
Unilateral or bilateral cryptorchid.
Viciousness or extreme shyness.
Albinism.
Entropion.
Ectropion. 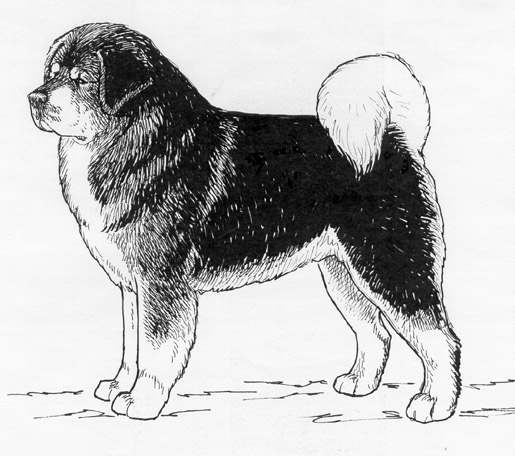