The Braque d’ Auvergne, or “Auvergne Pointer”, was developed in France by hunters who wanted a strong dog that could hunt tirelessly. It is a breed of ancient origins, known for two centuries in the Cantal region.

The Braque d’ Auvergne was recognized by the United Kennel Club in 2006.

A sturdy, robust, short-coated, black and white pointing dog of medium size, with distinctive Braque characteristics, his appearance suggests the capacity to work all day, covering a great deal of ground with supple action.

Kind, intelligent and tractable, the Braque d’ Auvergne has natural hunting instincts and a keen sense of smell. He is also well suited to family life.

The head is long, in proportion to the size of the dog, and characteristically somewhat lighter in females than in males. The stop is moderate but defined. In profile, the lines of the skull and the muzzle are slightly divergent.

Viewed from above, the skull is oval in shape. The occiput is only moderately defined. The width of the skull between the zygomatic arches is equal to its length.

Same length as the skull, with a straight nasal bone. Upper lips overlap the lower, forming a square end to the muzzle.

A full complement of strong teeth meet in a scissors or level bite.

Fairly large and set rather deeply, oval in shape and dark hazel in color, which creates a kind expression. Third eyelid is fully pigmented, as are eye rims. Whites of eyes are not apparent.

Large and broad with well opened nostrils. Black and shiny. Set on as an extension of the muzzle, slightly protruding.

Set low and well back on skull. Rounded at the tip, with a slight inward fold. Leather should reach to the nose but not beyond.

Long and slightly arched, approximately the same length as the head. Slight dewlap.

Shoulders strong and well muscled, with the shoulder blade sloping at a 45-degree angle to permit free movement.

Long, muscular and straight with elbows held close to the body. Distance from elbow to ground equals distance from top of withers to elbow. Pastern is short and slightly sloping.

Square in proportion, measured from breastbone to buttocks and withers to ground. Chest deep rather than wide, with oval shaped ribs. Withers high, back short, straight and not wide. Loin short and wide, especially in females. Croup slopes gently to set on of tail. Flanks are wide and only slightly hollowed with moderate tuck-up.

Oval in shape with deep, hard pads and tightly knit toes. Both front and rear feet point straight ahead.

Strong at the base, set on rather high and carried horizontally. If docked, it should be 6 to 8 inches in length. If natural, it should reach to the hock joint but not further.

Coat is short and shiny, not too fine. Skin is fine and rather loose but without exaggeration.

Black with white markings, either ticked or roaned. Head preferably black, with a white blaze, but white with ticking or roaning is acceptable.

An endurance trot, long-strided, but without exaggeration.

(An Eliminating Fault is a Fault serious enough that it eliminates the dog from obtaining any awards in a conformation event.)
Teeth: overshot or undershot, missing any teeth other than the first premolars.
Eyes: entropian, ectropian, light yellow (hawk) eyes, wall eyes, unpigmented eyerims.
Nose: Dudley nose.
Color: Solid black or solid white. Absence of ticking or roaning (clear white markings). Tawny or fawn shading or markings in coat.
Height: more than one inch over or under stated size. 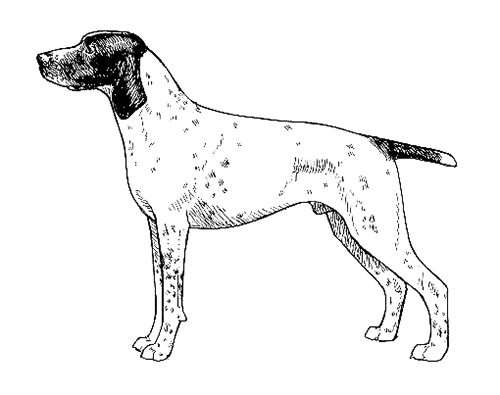